Reflections on The Gift of Motherhood

Last Sunday we celebrated and expressed our gratitude to God for the gift of motherhood. The modern Mother’s Day celebrations can actually be traced back to 1908, when Anna Jarvis held a memorial to honor her mother, Ann Jarvis at the St Andrew’s Methodist Church in Grafton, West Virginia. Her mother had been a peace activist who cared for the wounded on both sides of the American Civil War. She also created Mother’s Day Work Clubs to address public health issues. Anna decided that the best way to honor her mother was by continuing the work she had started and by working to establish Mother’s day as a day of rest to honor all mothers. Unfortunately, once the holiday took off, she quickly became disgusted by the rampant commercialism that had become attached to it. In fact in her obituary in the New York Times, she was quoted as saying:

Instead, Anna Jarvis encouraged people to go and see their mothers and if this was not possible, to write her a long, hand-written letter:

In this article I would like to share a few thoughts on the important role that mothers and wives play in the family, church, society and the nation. The tradition states that a wife is appointed by god as a help-mate to her husband. But in practice it is often the wife/mother who really makes a house a home and even a Christian household. Compared to her husband, the wife often fulfils her role better and contributes the larger share of work of making the household and this world a better place.

Moreover, whereas the school takes up the child’s education about the age of five or six years, the real formation of character begins long before that - even before the child is born. A mother can lay such a true and sound foundation in the child’s mind that nothing can unsettle it. The importance of these early years to ones later life is summed up in the famous Jesuit maxim attributed to St. Francais Xavier which states:

It may surprise you to know that the word “lady” comes from the Old English word “hlǣfdige”. The first part (hlǣf) may be translated as “loaf of bread” and the second part “dige” means to “knead”. This definition points to the fact that the nourishment of a people depends on women and mothers. Mothers know instinctively the value of each kind of food. A child my receive a large amount of food and yet remain under-nourished, because essential nutritional components are missing. In other words, these are empty calories. So “Mothercraft” is based on both science and commonsense and the real “lady” is the giver of food and nourishment.

Besides food for the body, a mother must think of providing mental and spiritual food. To turn a child’s mind in the right direction at the earliest possible moment is a great privilege of motherhood and it carries a great responsibility. Many of us received wisdom when, at our mothers’ knees, we said our prayers and asked many childish question which were well and tactfully answered. Karl Barth one of the great theologians of the 20th Century was asked if he could summarize his whole life’s work in theology in a sentence. Barth answered

Women and mothers are the pillars of the church. They make up the bulk of our congregations; they are always willing workers, when it comes to nurturing the children in our pews; they are wives, teachers, nurses, deacons, baptism and marriage instructors, lay ministers and priests. I’ll end this article with a video performance of one of my favourite hymns “O Zion, haste” written by Mary Ann Faulkner Thomson (1834–1923) who was a prolific hymn writer and poet. She bore twelve children, five of whom died in infancy. She wrote the lyrics to the song while sitting up one night with one of her children who was suffering with typhoid fever. 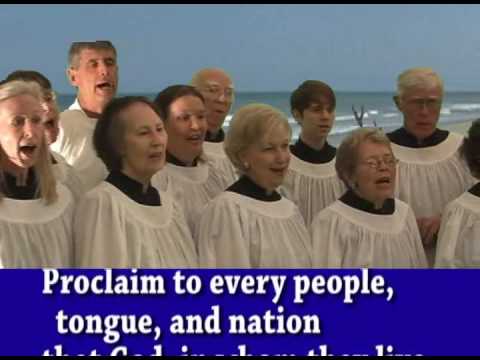